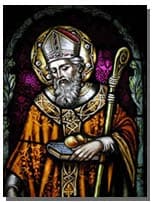 The rich Spanish Catholic history spanning 200 years of the Los Altos and Los Altos Hills area can be seen in street names from Purissima to Taafee. After the Franciscan Friars came, the original La Purissima Concepcion land grant was divided. The first parish services began with the 1860’s and the Jesuit parish Church in Santa Clara.

By 1901, St. Joseph’s Church in Mountain View was founded with our area as part of its mission. The large land grants had been divided and sold and the name Los Altos appears on a 1907 map. Mass in a home on San Antonio Road began in 1920 and by 1937 the Scout Hall and the American Legion Hall were used.

Two Holy Family Sisters aided by Celia Petar and Sarah Wright began teaching catechism in 1940. The Marini family from San Francisco purchased land for a church and with further generous support from other families, St. Nicholas Church was built and blessed in 1942 as a Mission of St. Joseph’s, Mountain View.

By 1947, it was an independent parish, with Monsignor Stanley Reilly, a former military chaplain and POW, as the first pastor. The Rectory was built in the following year.
St. Nicholas parish had 250 families and was debt free.

A school was dedicated in 1953 at Rosita and Campbell Avenues. The parish of 600 families had raised half the cost of the school, convent and hall. Dominican nuns taught, starting with the first four grades and graduated a class by 1957. Foreseeing a future school need, property on El Monte was purchased, but the growing parish size was too much for the small church. The Archdiocese split the parish, giving the school, convent and hall to the new
St. William Parish and St. Nicholas had the church and El Monte properties.

A new pastor was named in 1959, Father Richard Meade, also a former military chaplain and paratrooper. He led the people in building a school gymnasium and later a convent on the
El Monte property as classes started with first and second grades taught at
St. William’s library and auditorium. This school was taught by the Sisters of Mercy, Carrick-on-Suir, Co. Tipperary, Ireland. Opening in 1961, its first graduating class was
in 1967.

About Us ~ Find Out More

How to Find Us